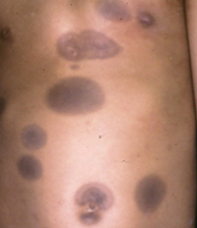 Figure 2. Post-inflammatory hyperpigmentation in a child who had multiple fixed drug eruptions secondary to paracetamol. 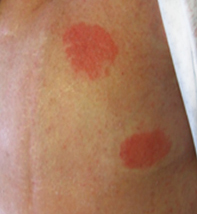 A 70-year-old woman presents with a persistent, uncomfortable and slightly eroded submammary rash that has been present for several weeks (Figure 1). She complains of a burning sensation in the rash. The rash has been treated with a potent topical corticosteroid, without improvement. A skin scraping and culture have not shown evidence of a fungal infection. The patient’s current prescribed medications are telmisartan, simvastatin and aspirin, and she also takes paracetamol for osteoarthritis. She is afebrile, and blood tests show a normal white cell count.

Fixed drug eruptions are an adverse event caused by many drugs; sulfonamides are common offenders (Figure 3). However, over-the-counter medications such as paracetamol and ibuprofen, which are often not reported by patients as part of their medication schedule, are also implicated. Although the rash can be uncomfortable, it remains localised and for this reason is not as severe as a generalised drug eruption.

A high degree of suspicion is required to diagnose a fixed drug eruption. A medication history and information about previous reaction sites are very informative. The diagnosis can be confirmed by a skin biopsy, which will reveal a lichenoid reaction pattern with prominent pigmentary incontinence that results in the clinical appearance of hyperpigmentation. An oral challenge may be performed and will reproduce the rash. For a patient who has been taking multiple medications, this may be the only way to confidently determine which one was responsible.

Cessation of the offending drug will resolve a fixed drug eruption. A short course of oral prednisone (0.5 mg/kg per day) will provide rapid relief of symptoms in severe cases. Without treatment, the rash resolves in seven to 10 days after cessation of the offending drug. A potent topical corticosteroid will provide symptomatic relief until the rash resolves. It is common for post-inflammatory hyperpigmentation to occur, even when the rash has been treated.

The offending drug should not be administered again or the rash will recur. In some patients, related drugs will produce the same rash if given in the future.