An unwell patient with a blistering rash

An unwell patient with a blistering rash

A 35-year-old woman presents with a three-day history of malaise, headaches, dysuria and sore throat. The day before her presentation she developed a widespread rash, which has now started to blister.

The patient suffers from depression and was commenced on lamotrigine two weeks ago by her psychiatrist. She was otherwise well. She has not taken lamotrigine before but she has been treated with lithium and sertraline.

On examination, the patient appears unwell and she has a temperature of 39oC. She has an erythematous eruption involving her torso, limbs and face; superficial erosions and blisters are appearing in some locations. Her conjunctivae are injected and she has pharyngitis and vaginitis.

The patient is sent urgently to the hospital accident and emergency department. By the time she arrives, 30% of her skin has blistered (Figures 1a and b). Blood tests are performed: FBC results show an eosinophilia and liver function test results are abnormal.

TEN is almost always induced by drugs (Box), with the most commonly involved drugs being sulfonamides, lamotrigine and antiepileptics. Patients who develop TEN are genetically predisposed to do so in response to certain drugs and therefore react on first exposure, usually 14 to 21 days after initiation of the drug. In some cases, however, no drug cause can be identified.

The use of oral prednisone in TEN is controversial; other immunosuppressive agents such as cyclosporine appear to be more effective.1 The use of single doses of tumour necrosis factor alpha (TNFα) inhibitors has recently been described as a successful therapeutic strategy in the management of TEN.2

Upon arrival at hospital, the patient’s lamotrigine treatment was ceased. A skin biopsy was performed, which demonstrated the full thickness epidermal necrosis typical of TEN. A single dose of adalimumab 40 mg was given immediately and she was transferred to the burns unit.

Over the next 48 hours the patient’s blistering ceased. She was treated with supportive care, wound dressings and intravenous fluids. An ophthalmologist was consulted, and corticosteroid eye drops were initiated for the ocular symptoms. The vaginitis was treated with corticosteroid pessaries. The patient was discharged from the burns unit after a week and she recovered without sequelae. 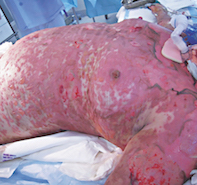 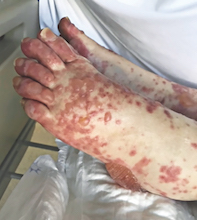 Figures 1a and b. The case patient's blistering rash after admission to hospital. Her torso (a, top) and limbs (b, above) are affected.

Figure 3. Photodistributed rash and erosions in a patient with acute systemic lupus erythematosus.

Side effects during cholesterol management. Is statin therapy always the cause?
Amiodarone-induced thyrotoxicosis: when it becomes a storm
New symmetrical hyperpigmented patches of skin
Drugs and the heart
An unwell patient with a blistering rash