A 54-year-old woman presents with a one-month history of a gradually progressive, blistering eruption involving her trunk, arms and legs (Figures 1a and b). She has not started any new medications and has no other medical conditions.

Conditions to consider among the differential diagnoses for an acute blistering eruption include the following.

Biopsy is diagnostic for PF and will show acantholysis with an accompanying eosinophilic spongiosis, whereas direct immunofluorescence of perilesional skin shows IgG in the subcorneal epidermis.5 Serum autoantibodies to desmoglein-1 correlate with disease activity and are useful to diagnose PF and monitor response to therapy.5

Pemphigus is a rare disease that tends to be chronic and difficult to treat. The treatment approach to PF has three phases: control (reduce number of new lesions), consolidation (achieve healing in 80% of lesions) and maintenance (prevent new lesions).5 The mainstay of treatment is oral corticosteroids, with other modalities such as pulsed methylprednisolone or plasmapheresis reserved for cases resistant to oral corticosteroids of 120mg daily.5 Off-label use of adjuvant immunosuppressant medications such as azathioprine, cyclosporin, cyclophosphamide, methotrexate and mycophenolate may be used with systemic corticosteroids in refractory cases. Off-label use of rituximab has been described as being useful in halting disease progress.6 Topical emollients should be used to restore the skin barrier and prevent superimposed skin infections.

This patient was admitted to hospital for investigation and management. A skin biopsy for histopathology and direct immunofluorescence was performed, which returned an acantholytic picture with intraepidermal clefting and positive intracellular IgG and C3. Pemphigus antibodies were detected by indirect immunofluorescence in blood. A pre-immunosuppression screen was performed with all parameters normal. She was diagnosed with PF and started on prednisone 50 mg daily, with rapid improvement. Initial treatment with rituximab resulted in a rapid improvement of her existing skin lesions. Treatment was subsequently changed and she remains on a slow taper of prednisone with azathioprine 100 mg daily as a corticosteroid sparer. 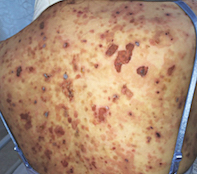 Figure 1a. Case patient. Crusted lesions on the posterior trunk. 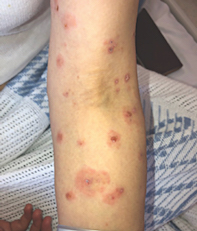 Figure 1b. Case patient. Bullae on an erythematous base on the arm.