A 68-year-old man is referred to the hospital emergency department by his primary care physician with worsening bullae on both legs (Figures 1a and b). He had a fall one week earlier in his backyard and is unsure how long he was immobilised. He does not recall any injuries after this event, but that evening he noticed a blister on the instep of his right foot. He was initially treated with cephalexin, but over the next few days he developed further bullae across both legs, which easily burst. These bullae are not associated with significant pain or pruritus and he has not used any other new medications. He has a medical history of atrial flutter and type 2 diabetes which is treated with insulin. His social circumstances are poor.

On examination, a bilateral polymorphic bullous eruption is observed. There is geometrical figurate erythema around the right medial knee bullae. On lower limb neurological examination, his sensation is intact to touch, heat, cold and vibration and he has normal propioception. He has no diabetic foot ulcers. He is tachycardic, with a heart rate of 128 beats per minute, but otherwise stable and afebrile.

Investigations reveal raised inflammatory markers, with a C-reactive protein level of 176 mg/mL and a white cell count of 12.2 x109/L. He is in a significant hyperosmolar hyperglycaemic state with a blood glucose level of 26 mmol/L and serum osmolarity of 339 mmol/L. Long-term control of his diabetes has been very poor, as evidenced by a HbA1c of 9.9%.

Treatment is initiated with empirical intravenous antibiotics, fluid resuscitation and an insulin infusion.

Conditions to consider for a patient with bullous disease of the lower limb include the following.

For a patient with suspected coma blisters, biopsy is important to rule out other potential causes like BP. Histopathological examination for coma blisters typically contains evidence of intraepidermal blisters, eccrine sweat gland necrosis and thrombosis of vessels in the upper dermis. Inflammatory infiltrate can be mild to moderate and neutrophils are sparsely found in the dermis.12

As coma blisters are self-limiting in nature, management is focused on the underlying risk factors and causes. In addition, frequent wound care and dressing changes are vital to prevent secondary wound issues. If the wounds become complicated by infection, it is important to involve a multidisciplinary team with infectious diseases specialists for appropriate antibiotics, surgeons for potential debridement and specialist nursing staff for optimal wound care and dressings.

For this patient, a punch biopsy showed nonspecific findings, including patchy spongiosis of the epidermis, isolated necrotic keratinocytes with no confluent epidermal necrosis and focal intracorneal clefting at the edge of the biopsy. The overall morphology, temporal association with immobilisation, rapid evolution and distribution of the bullae is consistent with a diagnosis of coma blisters. Wound swabs grew Staphylococcus argenteus, and the patient was treated with ongoing intravenous antibiotics. Wound care measures were implemented by nursing staff in the hospital. Unfortunately, the patient’s wounds were complicated and he required an extended hospital admission and wound debridement by plastic surgeons.

In this case, aggressive management of the patient’s hyperosmolar hyperglycaemic diabetes was important to prevent dehydration and electrolyte issues, as well as to optimise the wound healing environment. Ongoing investigations include blood glucose monitoring and assessment of osmolarity to ensure biochemical improvement. 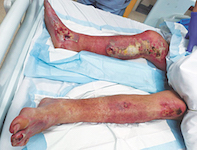 Figures 1a and b. Case patient. a (top). Denuded bullae and ulceration. The largest affected areas are the right calf, right medial foot and left knee. b (above). Intact bullae on the dorsum of the left great toe.