Diffuse linear streaks on the trunk and limbs

Diffuse linear streaks on the trunk and limbs

A 65-year-old man presents with a two-day history of a mildly itchy rash (Figures 1a and b). He has been otherwise well and denies any fevers, night sweats or unintentional weight loss. The patient does not have any other medical issues or take regular medications. He has not recently travelled or started any new medications.

On examination, there is a symmetrical maculopapular rash involving the patient’s trunk and his upper and lower limbs. The macules and papules are erythematous and have a distinct linear ‘flagellate’ appearance.

The morphology of the eruption is consistent with a flagellate dermatosis. The term flagellate describes a distribution that is patterned in linear streaks, as though the patient has been whipped. Flagellate rashes are often erythematous at first, evolving to become pigmented with time, and are rare. There are several known causes, some of which are serious. Conditions to consider among the differential diagnoses include the following.

In this patient, the diagnosis of shiitake mushroom dermatitis was made from a combination of a clinical history confirming shiitake mushroom consumption and a physical examination demonstrating the typical skin reaction. The absence of a history of medication use and hyperpigmentation excluded bleomycin-induced flagellate dermatitis. A full blood count showed normal white cell count and neutrophils, while a C-reactive protein level was within normal limits. The lack of constitutional symptoms concerning for DM (muscle weakness, photosensitive rash) or AOSD (fever, night sweats, arthralgia) made a systemic inflammatory process less likely. Skin biopsies were performed, which showed a patchy mild interface reaction with patchy vacuolar change and a perivascular lymphocytic infiltrate in the superficial dermis, consistent with shiitake mush-room dermatitis. Immunofluorescence testing returned negative results for IgA, IgG, IgM, C3 and fibrinogen.

The patient was reassured that the rash was not indicative of a sinister process and he was advised not to consume shiitake mushrooms again. His pruritus resolved with regular application of topical betamethasone dipropionate 0.05% ointment and moisturiser with oral antihistamines as required. He was reviewed two weeks later and his rash had resolved. 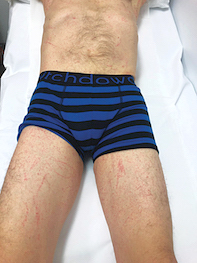 Figures 1a and b. Case patient. a (top). Linear erythematous maculopapular streaks on the forearm. b (above). The streaks were also observed on the thighs and trunk.