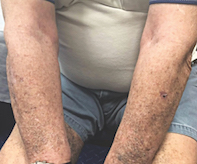 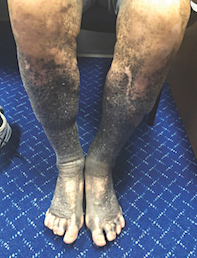 Figures 1a to c. Hyperpigmented black-grey macules on the patient’s hands (a. top), arms (b. centre) and legs and feet (c. bottom).

A 52-year-old man presents with hyperpigmented patches of skin on his upper and lower limbs that have been developing over the previous six months (Figures 1a to c). The hyperpigmentation is symmetrical and diffuse, with black-grey macules involving sun-exposed areas.

The patient’s other medical issues include hypertension and osteoarthritis, for which he has been taking amlodipine and slow-release paracetamol as required. He has been treated previously for rosacea. He does not have any allergies and works full-time in an office. The patient does not have a personal history or family history of melanoma, but he does report a family history of diabetes mellitus.

Conditions to consider in a patient with symmetrical, diffuse hyperpigmented patches of skin who is otherwise well include the following.

MIH is a relatively common adverse effect of minocycline therapy, usually seen in patients who require extended periods of therapy for chronic conditions such as rosacea and acne. This patient had been treated previously for rosacea, for which he was started on minocycline 100 mg twice daily 18 months prior. He was then lost to follow up and continued taking the medication, with prescriptions provided by his general practitioner.

Cutaneous hyperpigmentation may be the most apparent tissue involvement, but other sites that are adversely affected by minocycline therapy require examination – these include the nails, thyroid, heart valves and the oral and ophthalmic mucosae.7 Types I and II MIH are the most common types and resolve on cessation of minocycline, although patients should be warned this may take months. Type III MIH is rare and may persist despite withdrawal of minocycline.

In this patient, biopsy was performed and confirmed the diagnosis of type II MIH. Results of blood tests showed normal thyroid function, HbA1c, growth hormone and early morning cortisol levels. A serum test for mercury did not show a toxic level. He was agreeable to ceasing oral minocycline and to transitioning to topical metronidazole for his rosacea instead. His hyperpigmented lesions resolved within 24 months of stopping oral minocycline and his rosacea was controlled with topical therapy and intermittent short courses of doxycycline for acute flares.

Amiodarone-induced thyrotoxicosis: when it becomes a storm
New symmetrical hyperpigmented patches of skin
Drugs and the heart
An unwell patient with a blistering rash
Endocrine immune-related adverse events