A scalp lesion on a newborn baby 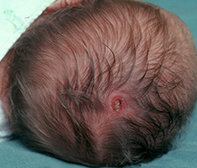 Figure. The lesion on the baby's scalp.

A newborn baby girl is noticed to have a small eroded lesion on the scalp (Figure). She was born by normal vaginal delivery and is otherwise healthy.

Conditions to consider in the differential diagnosis of a scalp lesion on a newborn baby include the following.

This is a clinical diagnosis and isolated aplasia cutis does not usually warrant further investigation other than a bacterial and viral skin swab, which is required to rule out neonatal herpes and superinfection. However, a lesion that is surrounded by a zone of hypertrichosis (‘hair collar sign’) or has a bullous appearance may be difficult to differentiate from a meningocoele, in which neural tissue is found outside the cranium and where there may be a connection to the dura. Imaging should always be performed in such cases. If the lesion is bullous and fluid-containing then there should never be an attempt to drain the lesion because it may connect with the cerebrospinal fluid.

The exact cause of aplasia cutis congenita is unknown – most cases are spontaneous but there is thought to be some association with teratogens and premature rupture of membranes. Rarely, aplasia cutis is associated with other congenital defects, such as cleft lip and palate and limb reduction defects (Adams–Oliver syndrome). There are also associations with chromosomal disorders, epidermal naevi of the scalp, development anomalies and fetus papyraceus. If a child appears dysmorphic or has an extensive scalp lesion or a nonscalp lesion, further imaging should be performed and a geneticist involved in management. If the lesion appears to be deep, potentially involving bone, imaging should be performed.

For a small lesion of aplasia cutis, such as in this case, no specific treatment is required. However, it is important that the wound be kept clean while it heals. All lesions will leave a scar, but the vast majority become less obvious with growth and do not require surgical intervention. Large lesions may require skin and or bone grafting or other methods of cosmetic repair to remove scar tissue when the child is older.

Persistent pruritic purple papules
Rapid onset of erythroderma in a 65-year-old man
A severe erythematous eruption with associated exfoliation
A girl with itchy plaques on the arms and legs
Haemangiomas. Treating those that won’t fade away