Thick warty crusts on the hands

Thick warty crusts on the hands

A 45-year-old man presents with thick warty crusts on the dorsal and palmar surfaces of both hands (Figures 1a and b). The eruption has been present for three months and is slightly itchy. There is also a brown discolouration of his fingernails.

The rash has been treated with topical corticosteroids but the patient believes these have made the rash worse. Blood tests have been performed and show blood eosinophilia.

A diagnosis of crusted scabies is readily confirmed by examination of skin scrapings, which will be teeming with mites and eggs. Dermoscopy may also reveal the mite at the end of a burrow.

The treatment of choice for crusted scabies is oral ivermectin (200 μg/kg), which is highly effective and should be given weekly. A keratolytic agent, 6% salicylic acid in an emollient base, should be applied nightly under damp cotton gloves to reduce hyperkeratosis. Hands are washed in the morning and the crusts debrided using a nail brush to remove scale. A topical scabicidal agent, 5% permethrin cream, is applied to the hands daily, and reapplied each time the hands are washed. Once a week, the scabicidal agent should also be applied to the entire skin (i.e. the whole body) and left on for 24 hours; nails should be cut short and brushed with the same agent and then the nail brush washed thoroughly in hot water. Oral and topical treatments are used for three to four weeks until clinical resolution occurs and, ideally, a repeat scraping from the hands is negative.1

In addition to treating the infestation, it is important to control the associated itch, which often persists after treatment is completed due to a hypersensitivity reaction to the scabies mites and their faeces and eggs.2 Paradoxically, itch in crusted scabies is often milder than in ordinary scabies. Topical corticosteroids are useful in treating itch, but a short course of oral prednisone may be used after the infestation has been cleared to treat itch that is severe and persistent.

Contact tracing is mandatory for all patients with scabies. The risk of disease transmission to other people by physical contact is high, especially for crusted scabies. If possible, individuals who have been in contact with the patient should be treated, including household contacts. The case patient described above lives in a remote Aboriginal community, where he works as a nurse, and it is likely that he has acquired the parasite at work. Scabies is endemic in Aboriginal communities in the Northern Territory and is a difficult problem, with health workers being at risk of contracting the infestation. Useful information is provided in guidelines developed by the Department of Health, Northern Territory for the Healthy Skin Program, a resource that is available online (see http://www.health.nt.gov.au/library/scripts/objectifyMedia.aspx?file=pdf/10/83.pdf).3 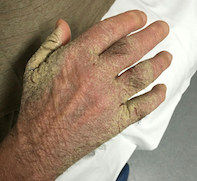 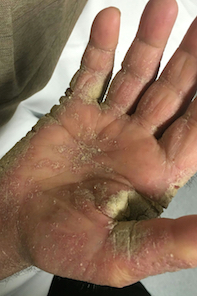 Figures 1a and b. Thick warty crusts on the patient’s hands.

Thick warty crusts on the hands
Generalised itching with wrist lesions
Could it be scabies?

Pruritic papules in a 10-month-old boy
Painful ulceration with necrosis on a finger
Frequently asked questions about psoriasis
Common skin problems in children. Rashes other than atopic dermatitis
Red-pink papules around a scar on the eyebrow