An area of cutaneous atrophy on the abdomen

An area of cutaneous atrophy on the abdomen

A 14-year-old girl presents with an area of marked cutaneous atrophy on her left lower abdomen that has developed over the last three months (Figure 1). Before this the skin was normal, with no preceding rash or oedema. She has been otherwise well and denies any trauma to the affected area.

The patient was diagnosed with type 1 diabetes mellitus at age 13 years, for which she is treated with insulin glargine and insulin aspart via a subcutaneous insulin pump. She recalls the area of atrophy as a site where her insulin pump was previously situated.

There is no family history of venous thromboembolism or of autoimmune disease.

The lipodystrophies are a heterogeneous group of diseases characterised by an abnormal change in adipose tissue, which may be either an increase (lipohypertrophy) or decrease (lipoatrophy). This patient’s age and the morphology of the lipoatrophy and lack of visible changes to adipose tissue bulk in other areas are consistent with an acquired localised lipoatrophy. Causes to consider among the differential diagnoses include the following.

For this patient, the history of insulin injection at the site and absence of trauma and other subcutaneous injections or systemic features concerning for autoimmune or connective tissue disease made insulin-induced lipoatrophy the likely diagnosis. Biopsy was not offered.

The chance of spontaneous resolution of the atrophic area is rare and treatment options directed toward increasing adipose tissue bulk include injection of purified human insulin to the edge of the atrophic area, as well as a combination of subcutaneously injected dexamethasone (4 mcg per unit of insulin) and insulin.9 A small case series has demonstrated the efficacy of subcutaneous cromolyn injections, a mast-cell stabilising agent, in reversing early insulin-induced lipoatrophic skin lesions, implicating a pathogenic role of mast cells in the development of these lipoatrophic changes.10 Diabetic patients with lipoatrophy have also experienced resolution of atrophic lesions following commencement of continuous subcutaneous insulin infusion with human purified insulins.8

The girl and her parents were advised that she should avoid further subcutaneous insulin injection to the affected site and to change the site of the insulin pump daily. In liaison with paediatric endocrinologists, her insulin was changed to insulin lispro, a human insulin analogue. The atrophic area to the left abdomen improved, with subsequent resolution over the following 12 months. 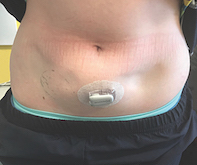 Figure 1. The localised depression of the skin on the left lower quadrant of the abdomen. A continuous glucose monitoring device is located in the hypogastric region.

Figure 2. Multiple well-circumscribed, pale-to-pink oval atrophic areas on the back of a 13-year-old boy, consistent with morphoea.