An 8-year-old boy presents with a scaly erythematous lesion on his left palm that has been present for six months (Figure 1). His thumbnail of the same hand became dystrophic four months ago (Figure 2).

Conditions to include in the differential diagnosis for a child of this age include the following.

Many forms of psoriasis may mimic a fungal infection in children. However, psoriasis might be suspected for a number of reasons. These include a negative skin scraping from a lesion that is thought to be a fungal infection or a lack of response to antifungal treatment. In addition, psoriasis may be suspected in a lesion that has demonstrated improvement with a potent topical corticosteroid followed by a rebound flare upon cessation of treatment. There may also be other clinical signs of psoriasis present, such as a scaly scalp, plaques on the extensor surfaces of the arms and legs and nail changes consistent with psoriasis such as nail pits and dystrophy (Figure 2). Improvement of the rash in summer is another reason to suspect psoriasis in a child. There is often a family history of psoriasis. For the patient described above, it would be reasonable to assume that the correct diagnosis is psoriasis if fungal and bacterial infection is ruled out by negative skin swabs and scrapings as well as microscopy and culture of nail clippings.

Childhood psoriasis can be difficult to manage and referral to a dermatologist is recommended. Several topical preparations used in combination are first-line management to induce remission; many patients also require long-term maintenance therapy. These therapies include topical corticosteroids (with or without calcipotriol), topical coal tar (with or without salicylic acid) and dithranol. UVB phototherapy is also sometimes required in children with psoriasis that is resistant to treatment. In very severe cases of psoriasis, systemic medications are used in treatment – these include acitretin, methotrexate and etanercept, a TNFα inhibitor that is approved in Australia for use in children. Fortunately, psoriasis of such severity is not commonly encountered in children.

Figure 1. The scaly, erythematous lesion on the palm. 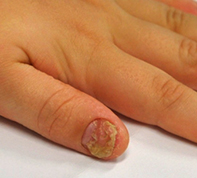 A child with dystrophic changes of the great toenails
Recurring swelling on finger
A longstanding palmar lesion and nail dystrophy
Nail disease: is it fungal and how should it be managed?
A case of onycholysis