A rash on the forearms of a hospitalised patient 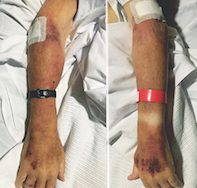 Figure 1. Hyperpigmentation of the patient's forearms with sparing of the skin under his watch. 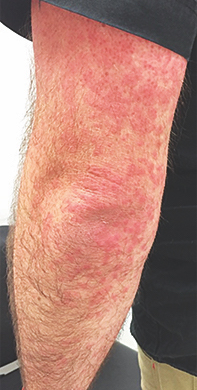 A 70-year-old man presents to hospital with peripheral lower leg oedema. He has metastatic pancreatic carcinoma and recently completed his first round of chemotherapy.

On admission, the patient is given an immediate dose of hydrochlorothiazide 100mg. Three days later he is noted to have a rash on his forearms that evolves into hyperpigmentation (Figure 1). The rash is erythematous, hot and itchy and associated with mild oedema. It has a sharp cut-off at the edge of his pyjama sleeve and the skin under his watch is spared.

Phototoxic drug eruptions are diagnosed clinically on the basis of a history of a precipitating agent, ultraviolet light exposure and a characteristic rash over only light-exposed areas.

The most important step in the management of phototoxic drug eruptions is to identify the causative agent. Once this has been established, the decision to cease the drug must be weighed against the therapeutic aims and benefit. Medications with short half-lives should be given at night. Patients being commenced on potential phototoxic medications should be educated regarding sun protection, including sunscreens that block both UVA and UVB rays. No specific treatment is needed and the rash will resolve spontaneously.

Amiodarone-induced thyrotoxicosis: when it becomes a storm
New symmetrical hyperpigmented patches of skin
Drugs and the heart
An unwell patient with a blistering rash
Endocrine immune-related adverse events

An area of cutaneous atrophy on the abdomen
Treating acne – how to minimise physical and emotional scarring
Diffuse linear streaks on the trunk and limbs
Keratinocyte skin cancers: diagnosis and current management
Recurrent, painful nodules on a girl’s legs