A scaly brown rash on the lower legs 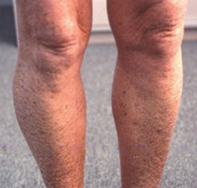 Figure 1. The scaly brown rash on the patient’s lower legs. 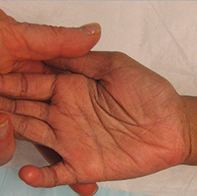 Figure 2. Hyperlinear palm in a patient with ichthyosis vulgaris. 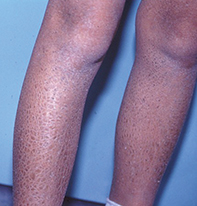 Figure 3. X-linked ichthyosis showing the typical ‘fish-scale’ eruption and hyperpigmentation. The scales are darker in colour in patients who have darker skin.

A 45-year-old man presents after noticing that the skin of his lower legs has become unusually scaly and brown during the winter months (Figure 1). The rash is not itchy.

The patient has a long history of ‘dry skin’, dating back to his early childhood. He mentions that his younger brother also has dry skin but his parents, sister and two daughters do not. Until a recent move to Victoria, the patient had lived in northern Queensland all his life.

When mild, X-linked recessive ichthyosis is commonly undiagnosed for a prolonged period or mistaken for ‘dry skin’, as in this case. Patients with ichthyosis who live in humid climates may be unaware of it. In this patient’s case, it was the change in his environment when he moved from Queensland to Victoria that led to the condition declaring itself for the first time. The fact that his younger brother has ‘dry skin’ and that his daughters and sisters do not are clues to a genetic X-linked condition. A proportion of patients with X-linked recessive ichthyosis have extracutaneous features, including testicular maldescent and asymptomatic corneal opacities.

The most important features of the clinical history of a patient with X-linked recessive ichthyosis are the sex of the patient and a positive family history. Serum lipoprotein electrophoresis can show increased mobility of LDL-cholesterol, which is suggestive of X-linked recessive ichthyosis.3 The diagnosis can be confirmed through chromosomal analysis using fluorescent in situ hybridisation (FISH), which can detect the absence or mutation of the steroid sulfatase gene.

X-linked recessive ichthyosis alone is usually a mild disease, with most patients managing their condition with regular application of emollients. Sun exposure, humid environments and short, lukewarm showers improve symptoms; avoidance of products that dry out the skin is also beneficial. The scaly appearance of the skin can be reduced with keratolytic agents such as urea and salicylic acid. A commercial mixture of topical urea, lactic acid and sodium pyrrolidone carboxylate is available that is often effective; however, it may be more suitable for use in older children and adults than babies and small children because it can cause stinging. In severe cases, there may be a role for topical retinoids to reduce the scaly appearance of the skin, but this may cause more skin dryness.

It is important to be aware of X-linked recessive ichthyosis because in female carriers it can result in prolonged labour associated with low maternal oestriol due to placental steroid sulfatase deficiency. Female carriers are phenotypically normal, but corneal stromal deposits may be detected on slit-lamp examination.

Red-pink papules around a scar on the eyebrow
An area of cutaneous atrophy on the abdomen
Treating acne – how to minimise physical and emotional scarring
Diffuse linear streaks on the trunk and limbs
Keratinocyte skin cancers: diagnosis and current management

Genomics: what it means for patients and GPs
Monogenic diabetes: does making the diagnosis matter?
A scaly brown rash on the lower legs
Turner syndrome: managing a multisystem disorder
Should we limit the conditions for which genetic tests are permitted?