Multiple crusted lesions on the scalp 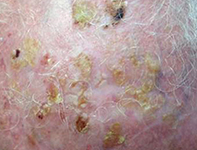 Figure. The crusted lesions on the patient’s scalp.

A 78-year-old man presents with multiple crusted irritable lesions on his scalp that he says have been slowly worsening over the past year (Figure). The lesions are irritable, causing him to pick and scratch. He has generalised sun damage and has had a history of actinic keratoses, basal cell carcinoma (BCC) and squamous cell carcinoma (SCC).

For a patient presenting with a suspected bacterial superinfection of an actinic keratosis, a bacterial swab should be taken in the first instance and any infection (which is usually caused by Staphylococcus aureus) should be treated with antibiotics. A biopsy should be performed to rule out erosive pustular dermatosis. In addition, any suspicious hyperkeratotic lesion with an indurated base should be biopsied to rule out SCC.

There are many management options for actinic keratosis and the optimal approach will depend on the extent, location, number of lesions and the general health and wishes of the patient. Localised lesions are managed with liquid nitrogen cryotherapy, curettage and cautery or photodynamic therapy. Dispersed lesions that cover a large area are often managed with 5-fluorouracil cream, which is a topical chemotherapeutic agent, or with topical imiquimod, which initiates an inflammatory cascade that specifically targets and causes apoptosis of dysplastic keratinocytes while sparing normal skin. Both of these ‘field therapies’ usually cause quite severe local irritation at the time of application but can be very effective – they also have the advantage of self-application, noting that it is important to assess an elderly patient’s home support before prescribing them. Other topical therapies include salicylic acid and diclofenac.

Patients who have a large number of actinic keratoses are at significantly increased lifelong risk of melanoma and nonmelanoma skin cancer and should therefore have a regular full skin examination. In general, this examination should be performed every six to 12 months, although for patients with severe actinic damage it may need to be more frequent. They should also be educated about the importance of sun protection measures. In a patient such as the elderly man described above, daily use of a sunscreen that is easy to apply, such as an aerosol spray formulation, coupled with wearing a hat when outdoors, would be the best advice.

For this patient, the skin infection was first treated with oral antibiotics and the crusts were debrided with the aid of salicylic acid cream. This was followed by treatment with topical 5-fluorouracil for three weeks. Individual hyperkeratotic lesions were treated with a combination of cryotherapy and curettage. One lesion proved to be a SCC and was excised. When treatment had been completed and his scalp was normal, the patient was advised to apply sunscreen every day and to wear a hat when outdoors, and because of the severity of his scalp lesions and past history of nonmelanoma skin cancer, to present for a medical examination every three months.